In order to bookmark a restaurant, you need to have an Account.
Please sign in to activate this functionnality.

This review may contain sponsored or affiliate links.

If you only have time to visit one art gallery in Paris, it should be Perrotin. Its founder, Emmanuel Perrotin, is the only French art dealer who managed to build an international empire, with six galleries in New York, Hong Kong, Shanghai, Seoul, Tokyo and, of course, Paris.

His journey in the art world is a self made man story as we love them. He started his adventure in 1990, at 21. At the time he was a total outsider, he hadn’t even finished high school, was living off odd jobs and hosted his first exhibitions in his own small studio.

Have more time to dedicate to gallery hopping? Here are our Top 10 Contemporary Art Galleries in Paris. 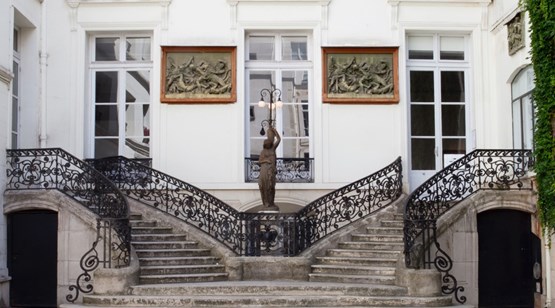 He built his company the hard way, faking richness and snobiety in the poshest art fairs around the world while sleeping in his office and eating McDonald’s every night for years. He took a lot of artistic and financial risks and chose to represent pop and/or provocative artists who were disregarded by the institution, like Damien Hirst, Maurizio Cattelan, Takashi Murakami or JR.

Today, he owns a stunning hôtel particulier in Le Marais — Paris’s art district and most fashionable neighborhood — plus another space in the back-alley, along with a majestic former ballroom a bit further down the same street… On Saturday afternoons, the gallery gets crowded with art lovers and Instagram influencers looking for the perfect background for their next picture.

If you’re a contemporary art nerd yourself or if you’re willing to flee mainstream places, don’t disregard the gallery either! Apart from the blockbuster shows, Perrotin also represents emerging artists as well as more conceptual forms of art which are less popular with the general public. Keep an eye on their program, you might be surprised!

Want to Know Where Else We Locals Go?
Join Our Free Urbansider Club For More Paris Tips & Picks

Don’t have a friend in Paris to point you to all the best places? You do as a part of our Urbansider Club! Join for free for access to personalized recommendations, downloadable guides, and a monthly newsletter with the latest from Paris as well as our new top addresses and experiences. You’ll also be invited to our exclusive Urbansider events in Paris.